Calgary Districts: Everything You Need to Know

Most Calgarians think of Calgary as being divided into quadrants: the Northwest, Northeast, Southwest and Southeast. They are right, of course, but not many who live here know that all changed in 2016 when the Calgary Real Estate Board (CREB®) decided to subdivide Calgary into eight separate districts.

Today, these Calgary Districts include:

Some people get confused by the fact that there is no longer a "Southwest" district in Calgary, but if you look at the actual shape of our city, it kind of makes sense:

How CREB®'s Calgary Districts Affects You

CREB's implementation of the new Calgary districts shown above came along with some other changes that affected both real estate agents and consumers in specific ways. However, as a homeowner, these changes had marginal effects on how people buy and sell real estate in the city.

If you are a real-estate-savvy person familiar with the city, perhaps you've noticed some of these changes already:

The North District in Calgary, for example, used to be part of the NW/NE quadrants, home to areas such as Livingston, Harvest Hills and Coventry Hills (NE addresses) that have a much different real estate portfolio than Skyview Ranch, Redstone or Coral Springs.

While most communities have retained their name and district, others may have seen a complete change. Panorama, for example, used to be part of the northwest quadrant; today, it is part of the North. Meanwhile, Tuscany remains in the Northwest Calgary District, as it had been before. 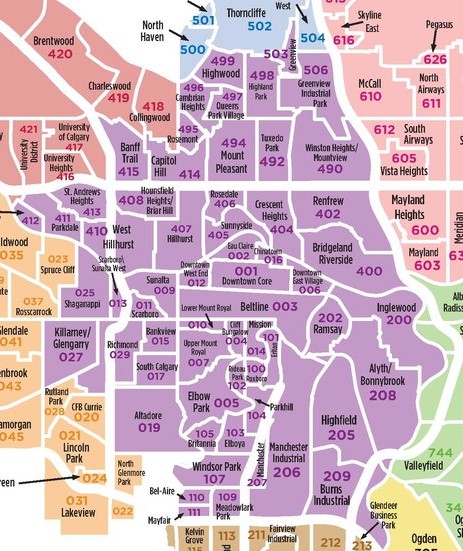 Calgary's City Centre District includes all communities part of the downtown / inner city. That includes neighbourhoods as far southwest as Killarney, as far southeast as Inglewood, as far south to Glenmore Trail and north to Highwood / Highland Park.

The City Centre is perhaps one of the most desirable areas to live in Calgary for its close-to-everything location, with convenient access to the river, Eau Claire, East Village and other vibrant areas of the city. 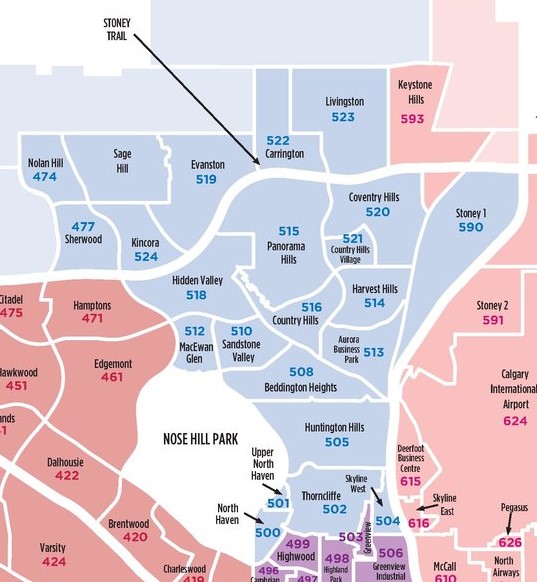 Calgary's North District includes all communities on the east and north side of Nose Hill Park that are also west of Deerfoot Trail. Evanston, Panorama and Nolan Hill, for example, are three award-winning neighbourhoods found in the area.

The North District is known for its diverse terrain which includes everything from plateaus to valleys amid the beautiful rolling foothills of Southern Alberta. Many communities in the area are well interconnected via beautiful ravines and paved pathways, making them family-oriented by design. 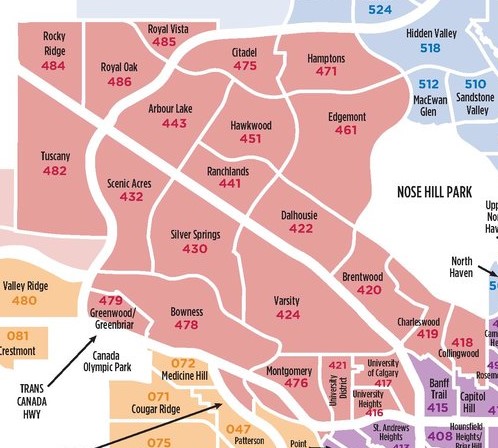 The Northwest District in Calgary is found to the west of Nose Hill Park and north of the Trans Canada Highway. It is home to popular family-oriented communities such as Tuscany, Bowness and Arbour Lake and is an excellent place for Calgarians to live who frequent the foothills and mountains.

Calgary's northwest is serviced by a C-Train line that runs along Crowchild Trail all the way to Tuscany, and soon Rocky Ridge. It is also home to many green spaces and parks found everywhere from the Bow River to the plateaus of Edgemont Estates. 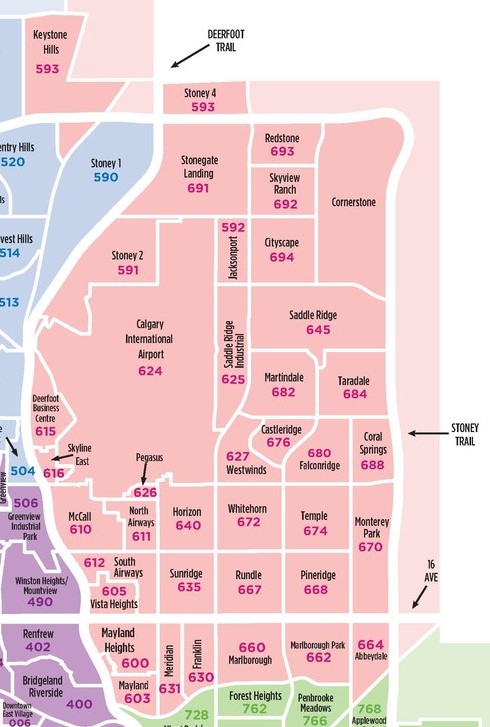 The northeast is a popular district in Calgary for those looking at more affordable living arrangements on a comparative basis with most other city areas. However, some exceptions exist, such as Coral Springs, a lake community home to semi-estate properties and an exclusive homeowners association.

The YYC International Airport is located in the northeast part of the city, making this Calgary District an ideal place to live for those who frequently travel. Serviced by a C-Train line, it is also a great area of Calgary to live in for those who use public transportation services.

The West District in Calgary is perhaps the most sought-after in the city. Known for its high-end real estate portfolio in reputed communities such as West Springs and Aspen, it is also ideally located for families looking to live a suburban lifestyle not too far away from the City Centre.

Like the NW, NE and S, Calgary's West District is also serviced by a relatively new C-Train line that extends all the way out to 69th Street SW. Outdoor enthusiasts also love the west for its close proximity to the mountains, allowing residents to skip the city traffic and escape to the west much more efficiently than if they were living on the east side of the city, for example. 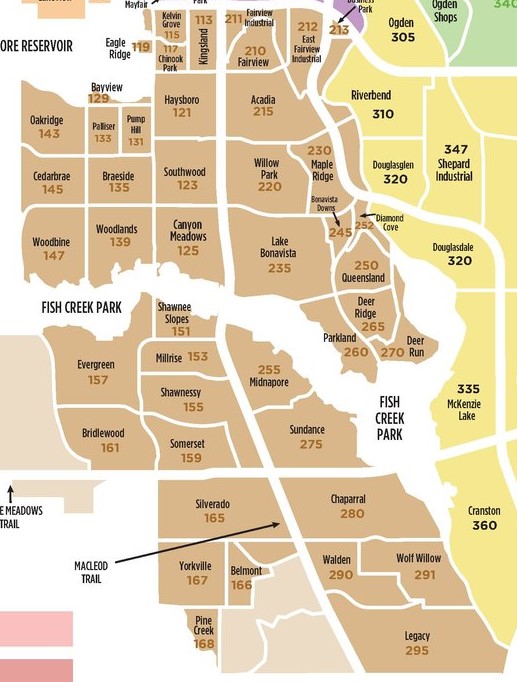 The South District in Calgary is perhaps better known by many Calgarians as the 'southwest.' This area is sought-after by many for its tight-knit, family-oriented communities that provide residents with easy access to areas such as Bragg Creek and Kananaskis Country.

Calgary's south is also serviced by the South LRT line, making it a convenient area to live for teenagers and young adults who may rely on public transportation to get from point A to B. It is also home to the massive Fish Creek Provincial Park that spans from west to east and exclusive lake communities such as Midnapore and Sundance where families tend to stay for the long-term. 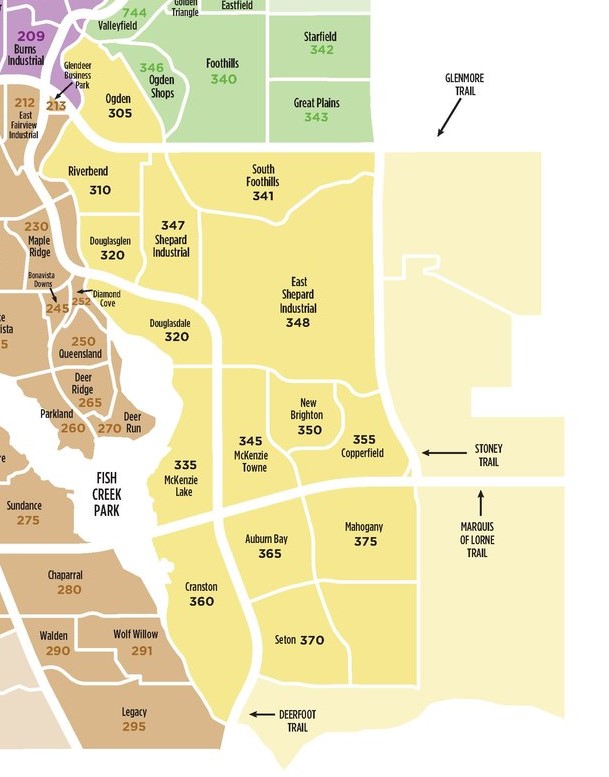 The Southeast District in Calgary is another family-oriented part of the city home to award-winning lake communities like Auburn Bay, McKenzie Lake and Mahogany. These neighbourhoods have a diverse real estate portfolio, ensuring an opportunity for buyers from many walks of life to gain exclusive access to the Homeowners Association and its facilities + events.

Calgary's southeast is well connected to other parts of the city via Stoney and Deerfoot Trails. It has quick and easy access to amenities in the Seton, Shawnessy and 130th Avenue complexes, new amenities at Belvedere via Stoney, and so much more! 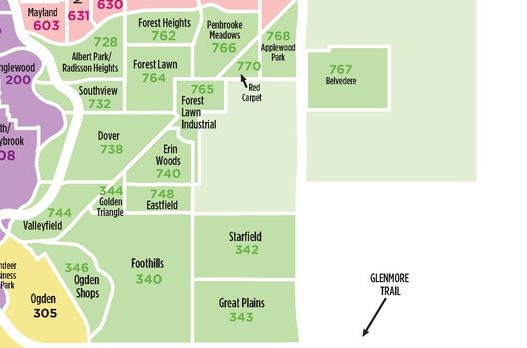 Calgary's east district is known for its affordable real estate – perhaps the most affordable in the city on a comparative basis with similar properties in other districts. Home to 17th Avenue SE, also known as 'International Avenue,' it is also one of Calgary's most ethnically diverse parts with many cultural centres and temples dedicated to various faiths.

The East District in Calgary is also home to an up-and-coming mixed-use community called Belvedere where you'll find a Costco, Best Buy, Home Depot and many more stores of the sort that make living nearby as convenient as it gets.

Questions about Districts in Calgary?

As highly experienced Realtors® in Calgary, we would love the opportunity to answer any questions you may have about Calgary districts. Don't hesitate to contact us anytime to discuss your real estate goals -- we are looking forward to connecting with you!

Category: Blog, Buying Tips, Calgary Communities, Selling Tips
Related Posts
How to Move Out Fast: 10+ General Tips
Top 5 Tips for Selling Your Home in the Fall or Winter
23 Tips for Winterizing Your Home Before the Cold
Contact Cody & Jordan What Is My Home Worth? Client Testimonials
+ -
Blog Categories
Sitemap