Home » What is a Chinook? Southern Alberta’s Weather Phenomenon!

What is a Chinook? Southern Alberta’s Weather Phenomenon!

What is a Chinook? Everything You Need to Know

A Chinook is a warm and dry wind originating from the Pacific Ocean which blows eastward over the Rockies, then cools on the mountainous slopes and warms significantly as it blows down onto the prairies.

In Alberta, Chinooks are most common in its southern region of Pincher Creek and Crowsnest Pass through to the Lethbridge areas which experience up to 30 or more every year. The weather phenomenon also occurs in Calgary on multiple occasions each year and can also happen north of Red Deer but not nearly as much.

- Rapid and substantial changes in temperature

- Others experience "Chinook headaches/migraines" due to the rapidly changing weather

- Chinook wins usually occur between November and May in Southern Alberta

How to Recognize Chinooks 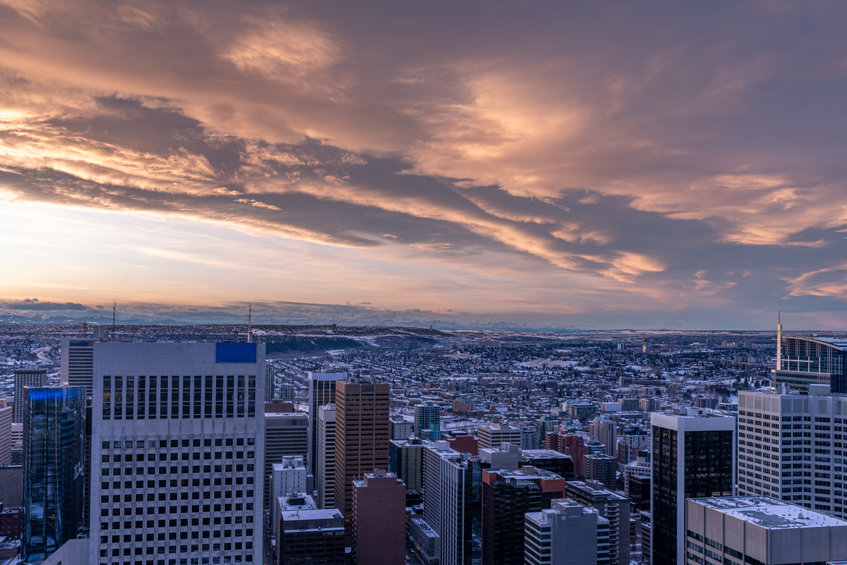 Chinook Arch Over Calgary at Sundown

Apart from the rapid temperature change they bring, Chinooks are most easily recognizable by the “Chinook arch” they form. A Chinook exhibits a long line of clouds spanning parallel to the Rocky Mountains with a definitively clear sky to the west and cloud to the east.

At times these arch's can seem like an imposing storm cloud, but in reality, they are winter’s “arch” nemesis. They can make for some amazing sunrise and sunsets in Calgary and throughout other parts of Southern Alberta that experience the weather phenomenon. When the first settlers of what would become Calgary arrived and established a North West Mounted Police outpost at the congruence of the Bow and Elbow Rivers, little did they know that they picked the perfect location.

This spot would experience Chinook winds every so often throughout winter which had the ability to change a cold winter's day into a warm one very quickly and melt a substantial amount of snow within a matter of hours.

As a born and raised Calgarian, I have become used to the warmth that the Chinook winds bring. Chinooks provide me and many people in our city with relief from the cold sub-zero temperatures of Calgary’s winters, just one of the things I absolutely love about YYC!

Want to learn more about the best things in the City of Calgary? Come and join us at Calgaryism on Facebook, Instagram and Twitter today and see daily updates via your live social media feed today. We hope to see you there!