What is Calgary's +15 Network? 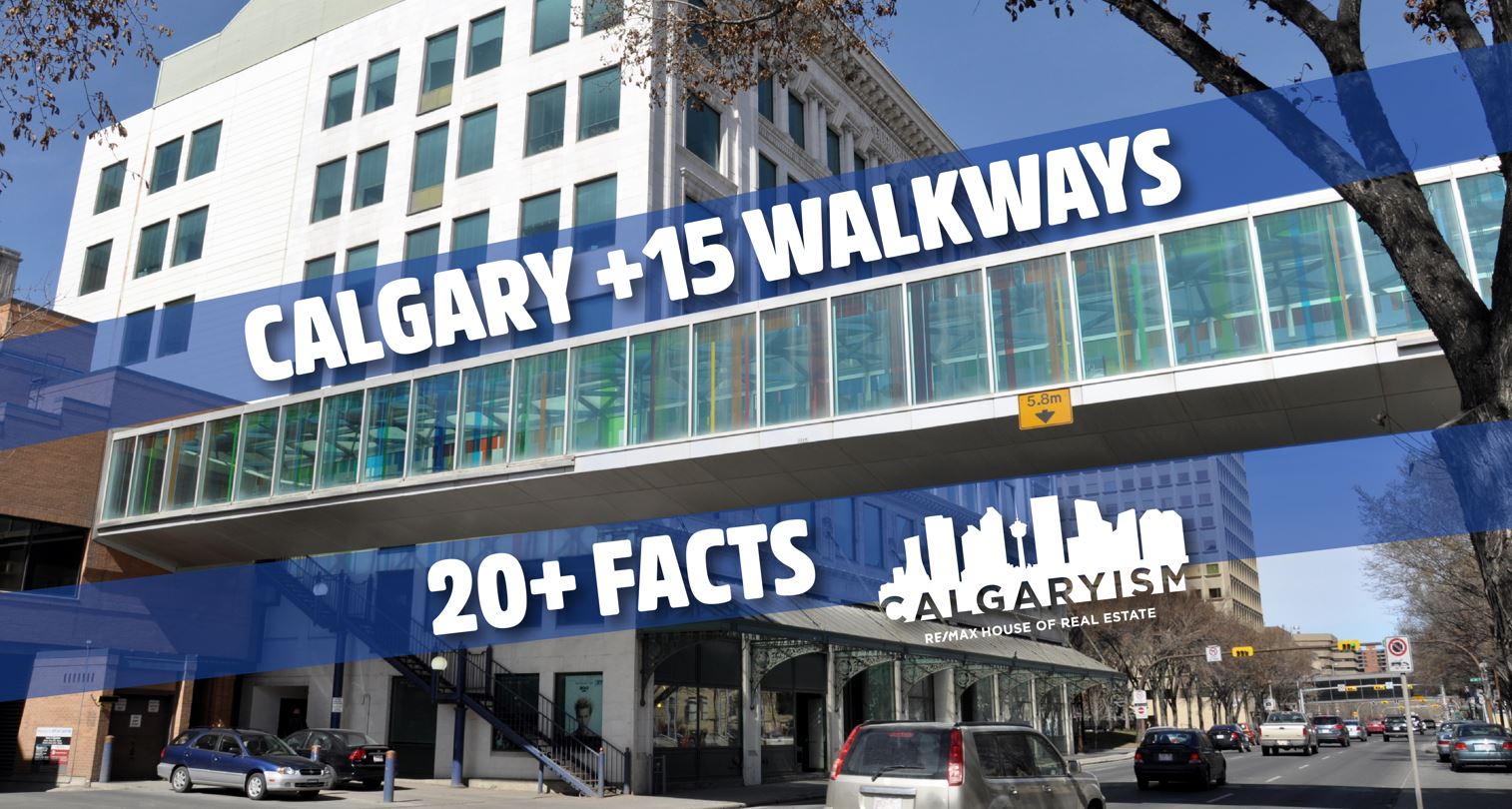 Also known as Calgary's "Skywalk," the downtown core's network of +15 walkways is one of the most extensive of its kind. Spanning a distance of more than 16 kilometres and consisting of more than 86 interconnecting bridges, these indoor walkways keep downtown Calgary workers warm during the winter as they go to and from point A to B to C and back again.

There are quite a few interesting facts about Calgary's Plus 15 network we'd like to share with you! As such an integral part of the downtown lifestyle, you got to check these out! Also see: 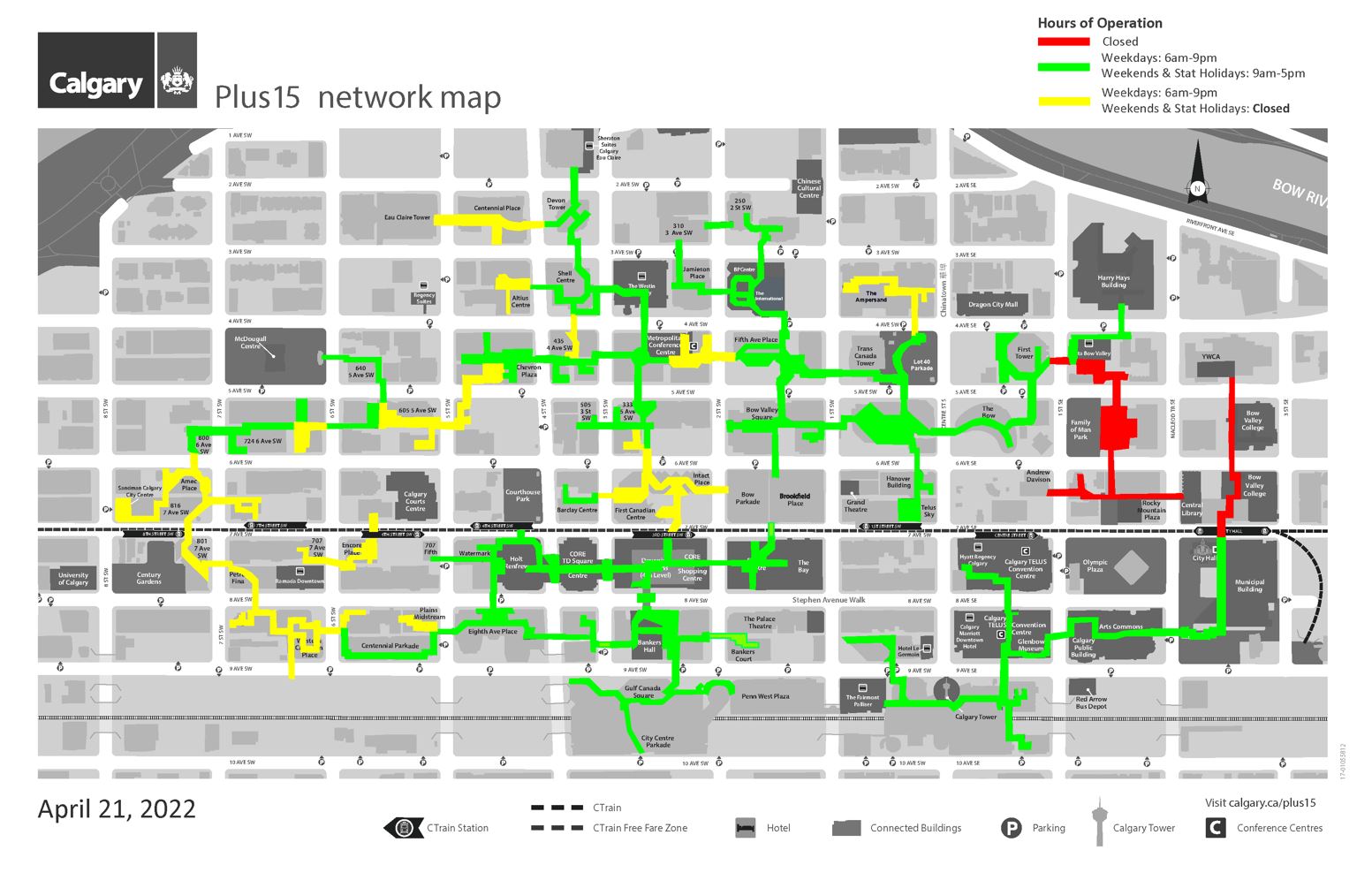 Plus 15 Network Map - City of Calgary

#1 – The Plus 15 system was created and designed by Harold Hanen in the 1960s, an architect who worked for the Calgary Planning Department.

#2 – The name “Plus 15” comes from the fact that these walkways are built with their bottom 15 feet above the street below. Some have additional walkways above that take on the name of “Plus 30” and “Plus 45,” for example, like the walkways between Bow Valley College's old and new buildings.

#3 – The first Plus 15 to come into operation connected the Westin Hotel and Calgary Palace in the north end of downtown, opening in 1973.

#4 – As mentioned above, over 16 kilometres of pathways are currently interconnected by 68 Plus 15 bridges. These numbers are growing every year; expect the Plus 15 walkway system in Calgary to be much larger in several years from now than it is today.

#5 - Today, there are more than 130 downtown buildings connected to the Plus 15 skywalk system in Calgary

#6 – The busiest bridge allows more than 22,000 people to cross between Energy Plaza and Centrum Place every business day of the week. This section is right in the heart of the downtown business core.

#7 - Calgary's Plus 15 Network was a central plot element in the 2000 film Waydowntown, directed by Gary Burns.

#8 – From north to south you can travel between 2nd Avenue and 10th Avenue SW, from Eau Claire to the Calgary Beltline. 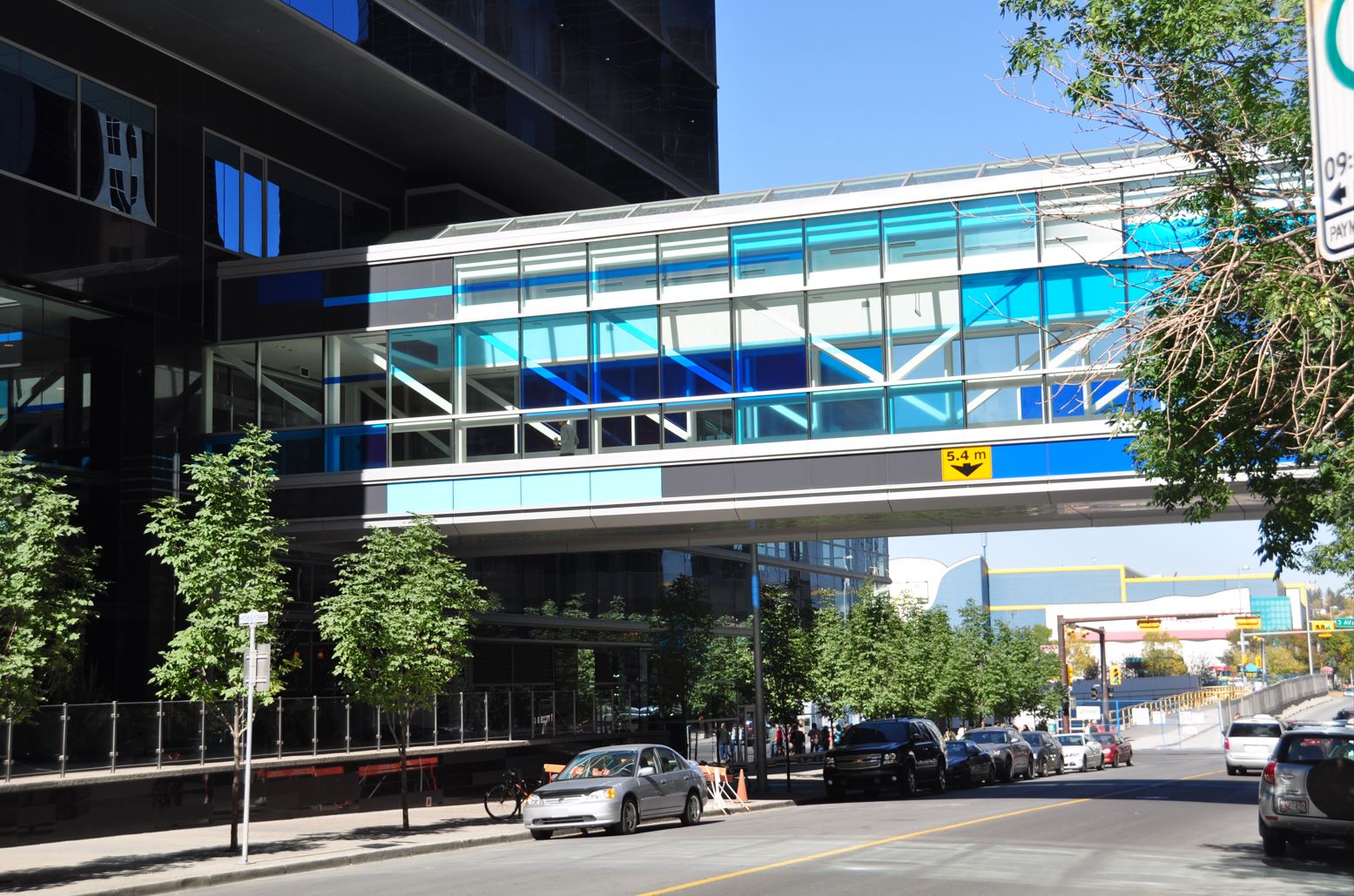 #9 – From east to west you can travel between Macleod Trail SE and 8th Street SW without taking a step outside if you wish - perfect during the cold winters Calgary often experiences.

#10 – The Core Shopping Mall serves as an “epicentre” of the Plus 15 Skywalks in Calgary and is home to more than 150+ different food vendors, restaurants, retailers and other services. See more of the Best Calgary Shopping Malls here.

#11 - North signs have a fish in the background which means you are heading towards the Bow River and its network of paved pathways.

#12 - South signs have a train representing the Canadian Pacific Railway tracks, which are found on downtown Calgary's southern border.

#13 - East signs have a fort motif paying tribute to Fort Calgary, established in the East Village area by the North West Mounted Police in 1875.

#14 - West signs have a mountain in the background as heading west for an hour you'll reach the beautiful Rocky Mountains.

#15 – Double-decker buses, like those seen in London England, will never have a place in Calgary because they won’t fit underneath the Plus 15’s.

#16 – Just because the Plus 15’s serve the same purpose doesn’t mean that they all look the same. You will see some with entirely different architecture to match the buildings they are between.

Inside a Plus 15 Walkway

#17 – A standard for nearly all new downtown construction projects whether that be residential or office is to have connectivity to the convenient Plus 15 Skywalk system.

#18 – Walk around long enough and you’ll count several shoe shining stations and small food and drink stands along the way.

#19 – It isn’t odd to see familiar faces in the Plus 15’s, whether that be co-workers, friends and even those old pals that you haven’t seen for ages.

#20 – While the Plus 15 network is beneficial both economically and climatically, it also keeps downtown streets safer and less prone to accidents involving pedestrians because there are fewer people streetside.

#21 – There has been skepticism that the network of indoor passages contributes to a deadening of the downtown streetscapes. While city planners are now carefully reviewing the placement of future Plus 15’s, they will no doubt continue to provide both climatic and economic benefits now and in the years ahead.

Calgary's Plus 15 Skywalks are just one of the best things about living in YYC! Learn more about our wonderful city and check out these 20 Reasons to Love Calgary today.

Until next time, we invite you to join us at Calgaryism on Facebook, Twitter and Instagram to stay updated via live social media feed on local activities, events, factoids, photos and more. We hope to see you there!