Home » 15+ Reasons Why to Consider Moving to Calgary, Alberta

15+ Reasons Why to Consider Moving to Calgary, Alberta

Why Consider Moving to Calgary, Alberta? 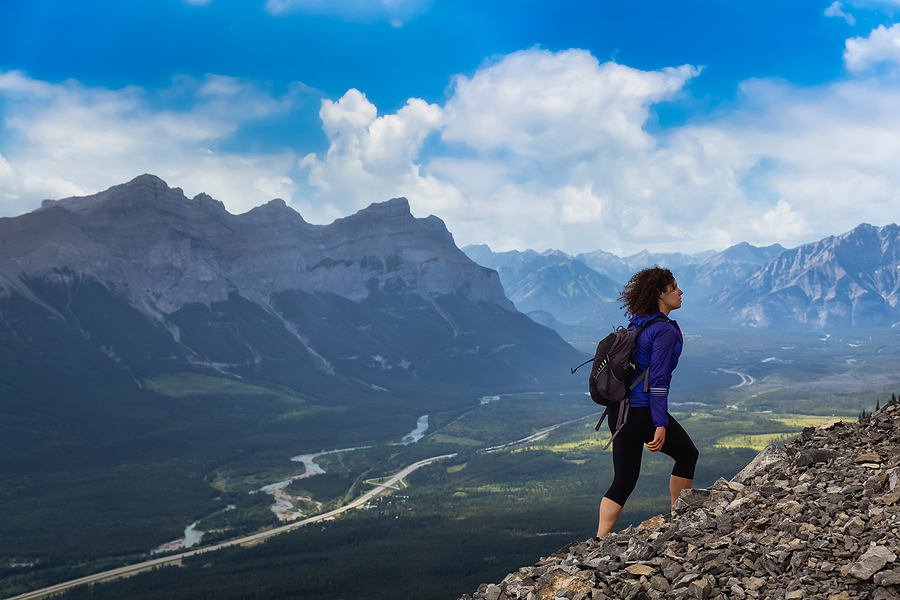 Are you thinking about moving to Calgary? If you don't know too much about "the Heart of the New West," then you'll definitely want to “Be a Part of the Energy” and check out these 16 reasons why relocating to Calgary might be right for you!

Moving to another city or province can be a stressful endeavour, especially if you aren't familiar with your end destination. Don't sweat it; there are people and resources you can use to become more comfortable with your move!

If you are planning on buying Calgary real estate as part of your move, it's best to contact an experienced Relocation Specialist and REALTOR® for a city tour and detailed introduction to properties that will fit your wants, needs and lifestyle best!

Calgary's population is one of the youngest and most educated out of all major cities in Canada with 70.2 per cent of the population between ages 15 to 64 according to Census 2016 results.

As of February 2021, the average age in Calgary was 37.6 years. This youthfulness brings vibrant energy to all aspects of the city's business and social scenes.

Calgary is home to two major post-secondary institutions Mount Royal University and the University of Calgary who serve more than 50,000 students annually in addition to several smaller colleges found throughout the city.

Home to 118 or approximately 1 in 7 of Canada’s 800 largest corporate headquarters, Calgary has one of the highest amount of head offices in Canada per capita.

As Canada’s centre for energy, roughly 84 of the 118 head offices in the city (nearly three-quarters) are part of the energy industry.

Today, Calgary is rapidly expanding its industry portfolio to branch out from just energy and is now home to several world-class internet technology companies.

This high concentration of head offices per capita provides many employment opportunities across a wide range of specializations. Did you know that Calgary is the sunniest major city in all of Canada!? That’s impressive!

Every year, Calgary gets an average of about 2,300 to 2,400 hours of sunshine through spring, summer, fall and winter.

Sunny ways have an uplifting affect on your psyche, even if it's just for a few hours on a winter day.

The downtown plus 15 walkway system is the largest indoor system of its kind in the world. Named after the height (in feet) above the street below, there are countless +15 bridges between downtown buildings that allow commuters to traverse the city centre without stepping foot on the street.

These are great for those who work, live and play in the city centre as they often reduce the need to go outside and are used by many in all seasons - especially winter. Downtown condo residents often have direct access to the +15 network via indoors, never having to step out onto the streets when the weather gets chilly.

Learn more about this unique feature of downtown Calgary here:

Alberta has consistently been one of the leaders in the North American job market since the turn of the century in terms of employment opportunities and growth. The completion of the TransCanada Pipeline in the late 1950s helped to advance Calgary into becoming the world-wide energy hub it is today.

Apart from Energy, Calgary is home to many key industries experiencing substantial growth over the last several years, including:

Back in 1912, Guy Weadick managed to set up the very first Calgary Stampede & Exhibition with the help of local businessmen known as the "Big Four." To date, the event has become one of the largest outdoor rodeos in the world with more than 1 million visitors every year!

The Stampede is just one of many world-renowned festivals that take place in Calgary. The Folk Music Festival is hosted by Prince’s Island Park downtown is another famous event and has been named one of the seven musical wonders of the planet by the Globe and Mail in the past.

Other festivals that liven up Calgary’s streets each year include:

Calgary’s cultural scene has grown enough to have a new event going on every weekend throughout the year! 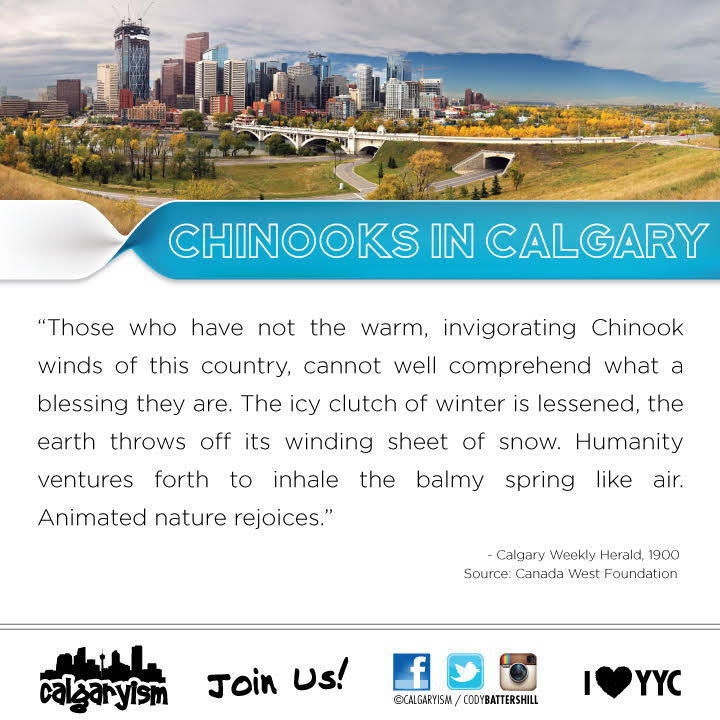 Calgary is lucky to experience Chinooks during the fall and winter which can change a cold day into a warm one within a matter of hours.

Many Calgarians love Chinook weather due to the fact that the snow melts and freezing temperatures thaw. Chinooks can last for several days also, making for the ultimate reprieve from chilly temperatures.

Chinook winds come from the warm Pacific Ocean, which then blow eastward and cool overtop the Rocky Mountains. After cooling, these winds rush down the mountain slopes and warm significantly as they spread out onto the prairies.

The National Music Centre in East Village has put Calgary on the musical map not only in Canada, but in North America as well!

This state-of-the-art facility provides residences for developing artists while exposing home grown talent to the international music community and will be a beginning for many successful musicians.

If you're an aspiring musician or artist, this may be a place for you to hone and develop your skills with the necessary tools to do so!

The Olympic Winter Games in 1988 left a lasting legacy on Calgary. Since then, Calgary's population has increased more than 50 per cent from 600,000 to 1.4 million.

These world-class facilities built and used in the 1988 Winter Olympic Games have been fully renovated and are in use by the public and Canada's top athletes till this day.

If you're looking to develop your athletic skills, access to some of the best facilities and training in the world may help you in your journey towards success!

Calgary's Mayor Naheed Nenshi was the first Muslim Mayor ever on the continent. Today, he is finishing his third-term and has been a symbol of Calgary’s diverse population for over a decade.

This speaks to the level of acceptance that Calgarians typically have for different cultures and religions other than their own. Calgary is a multi-cultural and diverse city that welcomes and supports everyone!

The people that have come to Calgary from other provinces and nations all together have brought with them their foods, culture and traditions which has led to an incredible selection of ethnic restaurants and events to check out year-round! Also see:

Located just 45 minutes east of the Rocky Mountains, Calgary presents residents with the opportunity to enjoy everything the foothills and mountains have to offer.

Whether that be hitting some of the best ski mountains in North America during the winter, or perhaps hitting up some epic hiking trails in the summer, there's just so much to do - and it's so close to home!

And don't worry, if you're not an outdoor junkie then visiting Banff or Lake Louise from time to time should score you some major points with the significant other. 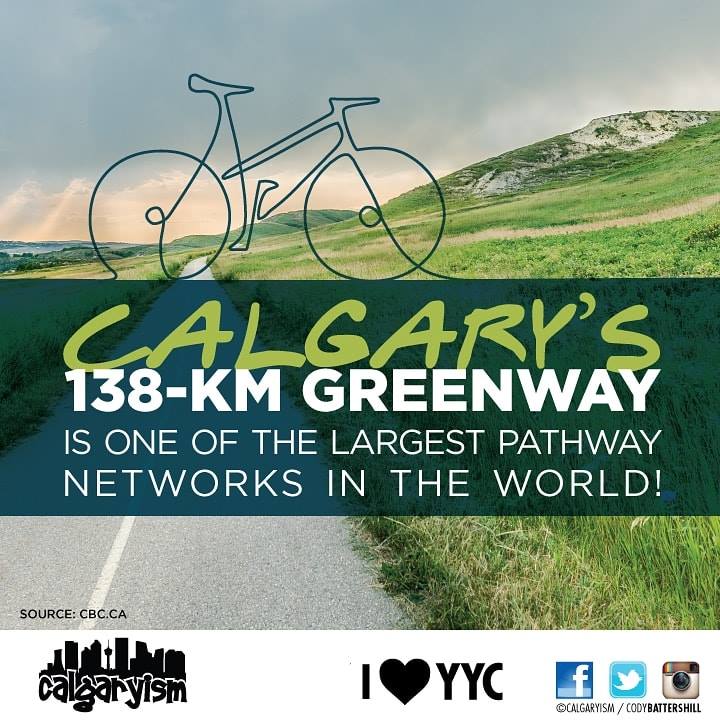 Did you know that Calgary has one of the most extensive urban pathway networks in North America?! The City of Calgary maintains roughly 1000 kilometres of regional pathways in addition to 96 kilometres of trails.

The Bow and Elbow River are lined with a paved pathway system that connects to nearly every part of the city. Both meet in downtown and are used by many workers to get to and from the city centre on business days.

Downtown and inner city pathways are often cleared throughout the year, making it easy for locals to use and enjoy at their pleasure.

Calgary is a place where people in front of you hold the door for you, say please and thank you and more often than not give you the respect you deserve.

These actions, even though miniscule in the broader spectrum of life, do add up and can sometimes affect the way people feel about living in the place they do.

Compared to other cities, drivers and people in general are much more personable and have more patience when dealing with strangers.

Calgary has been named the 5th best city to live in the world for 11 consecutive years in a row by the Economist Intelligence Unit's Livability Survey. This is an impressive accomplishment!

From 2009-2019, Canada consistently ranked in the top five on the EIU’s prestigious list, which analyzes several factors including access to healthcare, education and environmental initiatives to name a few.

We’ve written articles that go in more depth on Calgary’s ranking before. Check them out:

MoneySense Magazine ranked Calgary as the top place to live and raise a family in Canada in 2013. Factors considered include income levels, infrastructure, health care, education, and more.

While today Calgary's ranking on MoneySense's list has dropped, many of those original characteristics of the city still exist which come together to create an enjoyable family-friendly atmosphere for all.

Calgary has been ranked as the world's #1 eco-city by the Mercer Quality of Life Survey in 2010 out of 320 cities! This survey took into consideration things such as water drinkability and accessibility, sewage system quality, garbage extraction and the amount of pollution and traffic.

Today, the City of Calgary has several environmentally-friendly policies in place such as the green and blue bin programs as well as strict rules and regulations that guide contractor activity in all aspects of daily operations.

Are you not sure who to talk to about buying a home when relocating to Calgary? If so, please call me anytime! As a born-and-raised Calgarian, I have been an avid supporter of my city through my Facebook page Calgaryism for several years and know this city like the back of my hand.

Call me anytime at 403-370-4008 or send me a message here to chat about your real estate goals, and I will be happy to help! I am looking forward to being your relocation guide and helping you every step of the way as you relocate to Calgary!